一、 Pigments and the Absorption of Light色素与光吸收

At GCSE, you will have used the the following equation:

CO2吸收位置: The carbon dioxide enters the plant by stomata (in the leaves) or lenticels (in the stem). The water enters through the roots and moves up through the plant in xylem vessels.

Light is required as an energy source for the reaction and chlorophyll is necessary to absorb the light.

Light energy is necessary but it must be harvested and trapped by the photosynthetic pigments to be of any use.

Chlorophyll absorbs light from the visible part of the electromagnetic part of the spectrum, but there are several types of chlorophyll:

There are also other families of pigments, such as the carotenoids.

不同色素的吸光强度都不一样. 不同部位的色素吸光强度也不一样. Not all wavelengths of light are equally absorbed and different chlorophylls absorb more strongly in different parts of the visible spectrum. 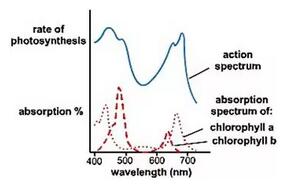 The action spectrum shows the rate of photosynthesis at different wavelengths.

The absorption spectrum shows how strongly the pigments absorb at different wavelengths.

The shorter the wavelength, the more energy it contains. During photosynthesis the light energy is converted into chemical energy. The absorbed light excites electrons in the pigment molecules and the energy can be passed on to be used by the plant.

The pigments are arranged in funnel shaped photosystems that sit on the thylakoid membranes in the chloroplasts.

The various accessory pigments absorb light of different wavelengths and pass the energy down the photosystem. Eventually the energy reaches the primary pigment that acts as a reaction centre.

There are 2 types of photosystem:

• Its primary pigment is a molecule of chlorophyll a with an absorption peak at 700nm. It is called P700

• Its primary pigment is a molecule of chlorophyll b with an absorption peak at 680nm. It is called P680

PS I are situated next to PS II on the thylakoid membrane. 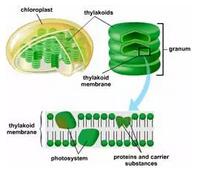 The aim is to produce ATP from ADP and inorganic P and harvest hydrogen so that carbon dioxide can be reduced to form a carbohydrate in the second series of reactions. The production of ATP using light is called photophosphorylation.

It will be useful if you refer to the Respiration Learn-it, and refresh your memory about electron carriers and the Chemiosmotic theory, as both reappear here.

There are many electron carriers involved, but the one that you must know about for the exams is NADP (nicotinamide adenine dinucleotide phosphate).

When light is absorbed by PS I and PS II, electrons in the chlorophyll molecule are boosted to higher energy levels. They are emitted and passed on to electron carriers.

The loss of electrons from PS II causes the splitting of water. The water gives up its electrons to PS II to fill the gap.

This leaves oxygen, which is given off as waste, and hydrogen ions. (See later in this Learn-it for loss of electrons from PS I).

The electrons are passed through a series of electron carriers at successively lower energy levels. This means that energy is released and used to form ATP out of ADP and P.

This occurs in a similar way to ATP production in mitochondria. The energy is actually used to pump hydrogen ions from the stroma across the thylakoid membrane. This creates an electrochemical gradient.

As the hydrogen ions diffuse back down the concentration gradient they flow through proteins. Part of each protein is ATP synthetase.

The energy released as the hydrogen ions diffuse down the concentration gradient is used to synthesize ATP. The electron eventually reaches PS I and fills the space.

The electrons from PS I may also pass onto an electron carrier and then combine with the hydrogen ions (from the water) to reduce NADP to NADPH.

This reduced NADP is used in the next series of reactions.

Note: No ATP has been made during this process.

This process is called non-cyclic photophosphorylation.

However, if there is plenty of NADPH, something different happens.

To summarise, in cyclic photophosphorylation:

• No oxygen is evolved.

• ATP is still made.

These reactions can occur in the light or the dark. They need ATP for energy to drive the reactions, and they need NADPH for reducing power. They occur in the stroma of the chloroplast and are called the Calvin cycle.

This 6-carbon sugar is unstable and breaks down to form two 3-carbon sugars. These are converted into triose phosphates using the energy from ATP and using the hydrogen from reduced NADP.

Most of this triose phosphate is used to regenerate RuBP, but some is used to produce 6-carbon sugars from which complex carbohydrates, amino acids and other substances are made.

For every twelve 3-carbon sugars (36 carbons):